“But as for me and my house, we will serve the Lord.”

We are second-generation missionaries, passionate about reaching souls in Peru, South America and beyond.

Joseph Kotvas grew up on the mission field, living and working with his family at Efata Baptist Church, School and Children’s Home for the Deaf in Lima, Peru. He was saved and baptized at nine years old, and he surrendered to preach the Gospel at a missions conference in Oklahoma City when he was twelve. Growing up on the field, he served in his local church every way he could, including visitation, web development, interpreting, piano accompaniment, teaching and preaching.

God continued to guide Joseph’s steps, and as a young man he began to see the need for godly preachers and teachers across Peru, specifically for the Deaf. After receiving his bachelor’s degree in education at Trinity Baptist College in Jacksonville, FL, Joseph followed the Lord’s leading to return to the mission field. In December 2013, He completed an 18-month internship as a student missionary affiliated with Macedonia World Baptist Missions, teaching in the Efata Christian School and leading the youth group in a nearby church plant. During that time, the Lord drew his heart to Zulema.

Zulema grew up in a Cristian family. Her parents served the Lord for many years in Iquitos, Peru, where her father was a Deaf pastor. At 7 years old, Zulema realized that she was a sinner, and she asked for forgiveness and received Jesus as her Lord and Savior.

Zulema’s father had to leave the ministry when she was a young teenager, and her family moved to Lima, the capital of Peru. The period after their arrival in Lima was difficult, but at the same time it was a preparation for Zulema’s personal life in faith and practice. As a teenager, it became her responsibility to care for her two younger brothers when their mother abandoned them, and their father had to travel and work abroad to provide for their family.

Zulema felt the power of God and His love in her life, and God was always faithful to provide their needs. When she was 12 years old, Zulema felt a deep love for the Deaf and was convinced that God wanted to use her for his work, but she resisted, and it was at age 15 in a missions conference that the Lord broke her heart. She accepted God’s challenge and surrendered herself fully to Him, understanding that He wanted her in Deaf ministry, and that He caused her to be born into a family of Deaf parents on purpose. 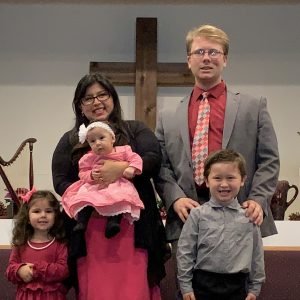 In 2013, as Zulema was studying in the Efata Bible College and Joseph served at Efata Baptist Church as a missionary intern, God allowed them to get to know each other and begin to envision a life together. In December 2013, Joseph and Zulema began courting, and they were engaged in June 2014. During that year, Joseph raised support from local churches in the US while Zulema lived and worked at Efata in Peru preparing for their wedding.

Joseph and Zulema were married in Lima, Peru on January 3, 2015, and they have been serving together as missionaries to the deaf ever since. God has blessed them with three beautiful children: JJ (five), Esther (three), and Grace (five months).

They rejoice in the opportunity to be used of God to train deaf and hearing leaders, establish churches and deaf ministries, promote Christian schools for deaf children, and reach souls for Christ across Peru and around the world.